Welcome to our new Year 6 bloggers Emillie & Natasha, they will endeavor to capture the WOW moments each week and share them with you here.

This week in Reception the children have been working on lots of exciting things including singing and baking delicious buns. They have also been making some waterproof clothing for Geoffly, so that he doesn’t get wet for when it’s raining outdoors.

When Year 5 were with Mrs Ingham this week they have been learning about Sukkot in RE; the children said that they have really enjoyed learning about it. Their favourite part of this week has been in RE when they watched a video based on Jewish harvest festivals.

Science was the main WOW moment in Year 6, the children have been learning about how mirrors reflect light. They have also been making periscopes; they can look over objects and around corners. Year 6 have tried really hard on their projects and would love to do it again another day. 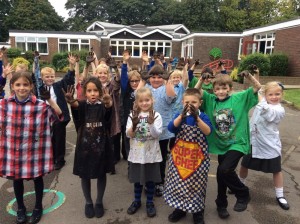